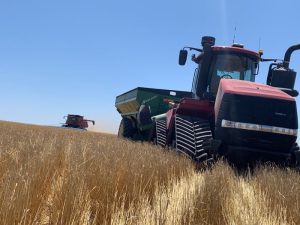 After extreme highs and lows in Nebraska throughout the wheat growing season, harvest has finally begun. Producers along the southern border and in the southwest corner of the state have cleaned and tuned up their combines and are hitting the fields this week. As the month progresses we will see harvest continue to move into the northern panhandle to wrap up Nebraska’s wheat growing season.

Mother Nature was not kind to wheat farmers this year. Hard late freezes, minimal moisture and one of the hottest June’s in history took its toll on the state’s crop. “The April freezes claimed some fields and also left the crop standing shorter than normal” said Royce Schaneman, Executive Director of the Nebraska Wheat Board. “Producers were continually weary throughout the season due to the lack of rain paired with hot, windy days. The soil moisture seemed to be continually depleted.”

For most of the state, harvest is beginning earlier than normal with the exception of the southeast corner being a week late. Mark Knobel, a wheat farmer from Fairbury, NE said “I expect yields to be average this year. Protein content should be good due to the lower yields, though we may find ourselves in trouble if we get low test weights.”

Along with Hard Red Winter wheat, Nebraska will also be harvesting around 10,000 acres of Hard Red Spring wheat this year. The Hard Red Spring variety began appearing in the state a few years ago as farmers looked for alternative wheat markets and value added products. Acres planted has been on a gradual increase, though this year’s crop may not fair the best. “My spring wheat is standing 10” tall,” explained Brent Robertson, a wheat farmer near Elsie, NE. “It is beginning to turn, though I don’t expect to see a good return on it this year.” 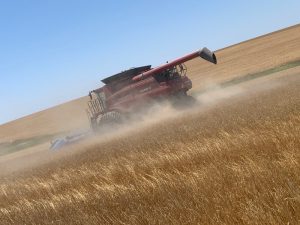 As the Nebraska wheat harvest goes into full effect this upcoming week, producers will gain a better understanding of where their crop stands this year. There are many predictions of an average crop and the United States Department of Agriculture is predicting a 44.4 million bushel harvest.